This year, the Cambridge Writers’ Workshop’s Summer Writing Retreat in Granada, Spain, will take place from August 3-10, 2015. At the event, we’ll be hosting a wide variety of craft of writing seminars, creative writing workshops, and special readings from our Granada 2015 faculty, which includes Peter Orner, Rita Banerjee, Diana Norma Szokolyai, Jessica Reidy, and Elissa Lewis. One of our featured faculty members is Peter Orner, a novelist and short story writer and winner of a Guggenheim Fellowship. The Cambridge Writers’ Workshop’s Katy Miller sat down to speak with Peter for an interview. Read below to see the interview, and be sure to register for our Granada retreat by April 20!

KM: You’ve taught many writing courses from the Iowa Writers’ Workshop to Charles University in Prague to your current position at San Francisco State. Does teaching affect your own viewpoint of the writing process?

PO: It’s such an honor that people trust me with their stories, and this is something I’ve never taken for granted. While I’m pretty sure writing can’t be taught, being a part of a group of artists who care about literature is in itself a great and often inspiring gift. This is lonely work—I spend so much time alone, either at my desk or wandering around the city.

Teaching has always been a kind of tether to the lives of other people, and like I say I’m very grateful for it. It doesn’t make my own work go any easier but it does help to know that other people – students, colleagues, share the same challenges. We’re all trying to say what maybe can’t be said as best we can…

KM: “Compression” is a word that’s often used when discussing your stories. Do these stories usually start off as clean and short as they end up, or is there a lot of cutting down and revision that goes into them?

PO: Really depends on the story, sometimes they do start off much longer and then I chip away and chip away. Other times, they come out in sort of one breath, if this makes any sense. I do think if a story or a novel for that matter can be any shorter, I will try and make it so. I don’t like to waste words.

KM: How would you compare your approach to writing the short story versus writing a novel or writing nonfiction?

PO: With a novel I settle in with my characters for the long haul—and I hope a reader will too. With a story I’m trying, in a sense, to grab onto a moment and hold steady for a bit. I want the moment to last longer, and for it to exist far beyond the page. Non-fiction is a whole different deal, and exciting in its own way. I spend so much time making stuff off, lying basically as a profession. There is something almost liberating about trying to hone as best I can to the truth.

KM: In Esther Stories and Last Car over the Sagamore Bridge, grief and pain in family relationships are recurring themes. What draws you to writing this subject matter?

PO: I think these are the stories that make us us. Our families, our griefs, our pain. Mixed in there, of course, is a great deal of joy and comedy. Got to have comedy. Funerals are always funnier to me than weddings. Am I alone here? And its strange, the comedy, the laughter, only makes the pain, the grief, the loss, more acute and vice versa.

KM: Geography is very present in your stories, from Fall River, Massachusetts to Nova Scotia. Do you begin a story from a sense or place? How do you typically choose a setting?

PO: Yes, I do start very often from place, a real place, and then I do my best to make a myth around that place. So it might be Fall River, or Namibia, or Chicago. I try to know as much as possible about the real place. Only then do I feel free to try to make my own fictional version of these real places. 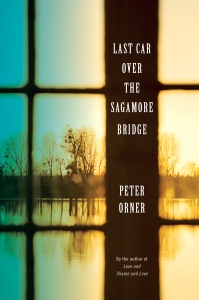 KM: What made you decide to weave characters from your older works, like the Kaplans, into your newer works like Sagamore?

PO: Sometimes characters just keep talking to me. It’s weird, I think I’m done with a character, like when a character dies for instance. And then the next morning I wake up and that dead character is talking to me again as if I didn’t kill him off. In fiction, you can bring people back to life, which is nice.

KM: Your stories often capture deep emotion but don’t rely on melodrama. Do you have any tips for writing tragedy without drama?

PO: Don’t push anything, don’t try and sell it. Emotion doesn’t need to be sold. I find readers will go with you if you don’t tell them what to feel.

KM: What projects are you currently working on?

PO: Pretty busy with new work, a new fiction, longer stuff and shorter, and new non-fiction, this one set in Haiti.

KM: What kind of workshops do you plan to offer when you join us on our Granada, Spain retreat?

PO: I’m so looking forward to Granada. What an unusual place to write and read. I’m going to do a story writing workshop where participants will leave with a number of stories in progress, as well as a craft/ literature class that will focus on Spanish literature in English translation.

KM: What advice do you have for aspiring writers?

PO: You’ve got time. I’ve never met a writer who says I have enough time to write, but the fact is that you do. We all do. In spite of our lives, our jobs, our families, our responsibilities. Even just a few quiet minutes a day can take you deep into a story. Dawn is always a good time to do some work.

Peter Orner is the Chicago-born author of two novels, Love and Shame and Love (Little, Brown 2011) and The Second Coming of Mavala Shikongo (Little, Brown, 2006) and two story collections, Esther Stories (Houghton Mifflin 2001/ Little, Brown 2013 with a forward by Marilynne Robinson) and Last Car Over the Sagamore Bridge (Little, Brown, 2013). Orner’s fiction and non-fiction has appeared in the New York Times, the Atlantic Monthly, Granta, The Paris Review, McSweeney’s, Tin House, and has been anthologized in Best American Stories and twice won a Pushcart Prize. Orner was awarded a Guggenheim Fellowship (2006), as well as the two-year Lannan Foundation Literary Fellowship (2007-2008). He is also the editor of two books of non-fiction from McSweeney’s/ Voice of Witness, one about immigration in the U.S., and the other about Zimbabwe, and is currently working on a new volume set in Haiti. A film version of one of Orner’s stories, “The Raft” with a screenplay by Orner and the film’s director, Rob Jones, is currently in production and stars Ed Asner. He has also been awarded the Rome Prize from the American Academy of Arts and Letters, the Goldberg Prize for Jewish Fiction, the California Book Award, and the Bard Fiction Prize. Orner has taught at the University of Iowa Writers’ Workshop, the University of Montana, Bard College, and is currently a professor in the MFA program at San Francisco State University as well as a member of the fiction faculty at Warren Wilson College. He lives in Bolinas, California where he’ also a member of the volunteer fire department.