This April, I joined an amazing group of writers at the Cambridge Writers’ Workshop 2017 Spring in Portland Writing Retreat, hosted in the Alberta Arts District. During our brief weekend, we enjoyed an inspired writing session at the (not so) Secret Library located in the historic Heathman Hotel; an afternoon exploring Powell’s, Portland’s most well-known bookstore that occupies a full city block and boasts a collection of one million books; and a public reading from local author Paul Dage at the American legion hall on Alberta Street.

I have been lucky enough to call Portland my home for the past year. Before moving here, I spent more than a decade living on the east coast, and have found Portland to be a different kind of city. If you’ve seen Portlandia, you know what I mean. From the outside, what usually stands out is Portland’s weirdness, often compared to the likes of Austin and Pittsburgh for its quirky locals and offbeat places (a museum of vacuums, abandoned schools/banks/jails turned into bars, and a vegan strip club, just to name a few). On the inside, Portland is a gem of a city that prides itself in many things: environmental consciousness, craft brewing, and a farm-to-table ethos – local bacon jam, local salt, local ketchup, local coffee roasters, and I could go on forever. Most of all, Portland is a city of passion, arts, and community, which frequently celebrates its indie authors, publishers, and artists. So in today’s post, I’m happy to share a few recommendations on the best places to write, discuss books, and otherwise soak up the creative life here in Portland. 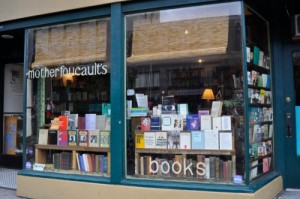 This beloved indie bookshop sells new and used books, and proud of its bookish, low-tech environment (cash only, no cell phones, and they don’t have a website). With floor-to-ceiling wood bookshelves, a small stage, a back room for book groups, Mother Foucault’s is a great spot to get lost reading. They host several readings and events for writers, poets, and performers, including this summer’s Last Thursdays of Humanity – an open stage for storytellers to respond to the current state of America. 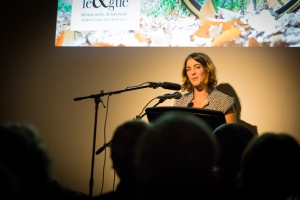 In addition to poetry slams, Portland has a few groups hosting spoken word open mics. The Liars’ League originally formed in London and has spread to NYC, Hong Kong, and Portland. Every month’s event is based on a theme like “East and West” and “Willpower and Shame.” The League picks the best  short fiction and then casts actors to reach them at the live event. And in the past week, the Liars’ League PDX will be part of The Archive Project, a collaboration between Literary Arts and OPB Radio that features recordings from lit/poetry slams and other live literary events around Portland. 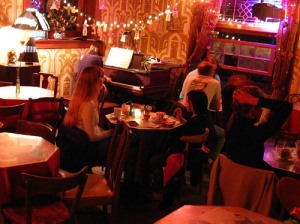 One of my favorite writing spots, the Rimsky-Korsakoffee House is one of the oldest coffee houses in the city and is full of oddities including a coffin centerpiece and self-rotating tables. Inside a Victorian house in Southeast Portland (formerly a warehouse and industrial neighborhood that now offers hip eateries and shops), Rimsky’s is great for a late-night writing session, complete with coffee and to-die-for desserts and live classical music. According to owner Goody Cable, “the house is haunted by it former tenants, a pair of writers who bore witness to the Russian revolution.”

Originally built in 1914 as Cotillion Hall to host dance revivals and popular music artists during the Great Depression, the Crystal Ballroom continues to be one of Portland’s top music venues. Even after decades of changes, the building has managed to maintain its unique character, in its high ceilings, murals, chandeliers, wide-arched windows, and restored “floating” dance floor. In addition to bringing in local and national bands, the ballroom also hosts its 80s and 90s dance parties that have been drawing crowds for the past ten years. 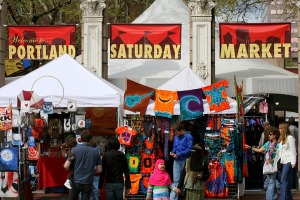 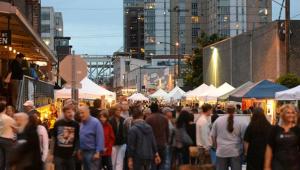 Originally a gathering of art collectors and dealers, this is the place to discover Portland’s thriving art scene. In the heart of the Pearl District, First Thursdays draws thousands into the area’s thirty-plus art galleries spread over eight city blocks, so you can meet local sculptors, painters, photographers, collectors, and others over wine and a shared love of art. Come summertime, the closed-off blocks come alive through live music, beer, food, and new friends.

Revolution Hall is a performing arts venue and concert hall. It’s housed in what used to be the Washington High School building in Southeast, which was abandoned after the ‘80s and later renovated as a performance venue in 2013. It’s hosted local bands from Portland’s Mississippi Studios among a variety of national and international acts – from blues to grassroots to British indie rock. While most of the calendar is filled with bands, they host other exciting events like comedy, live author events (in Feb, an Evening with Activist/Journalist Dan Savage) and live radio productions, including Cheryl Strayed’s Dear Sugar radio show and LiveWire (a popular live variety show).

Angie Walls is a short story writer, novelist, and screenwriter who grew up in Springfield, Missouri, near the Ozarks. Many of her stories explore contemporary themes of identity, isolation, and helplessness in the Midwest. She is the award-winning screenwriter and director behind Redmonton, an original web series inspired by her hometown, and has published stories in various journals including Cutthroat, East Bay Review, Summerset Review, Halfway Down the Stairs, The Helix, Fredericksburg Literary and Art Review, The Griffin, and Stirring. Her short story “Things We Should’ve Said” received an honorable mention from Glimmer Train, and one of her essays will be published in Carve Magazine. In 2017, she will be releasing a new book of short stories, Anywhere But Here.  Angie Walls is an alumna of our 2017 Spring in Portland Writing Retreat.