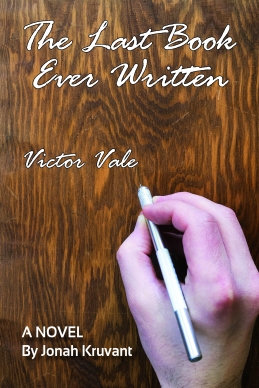 CWW Exec Board Member Jonah Kruvant sold and autographed his new book, “The Last Book Ever Written,” at our table during the conference.

If you visited our table at AWP 2015, you may have gotten the chance to meet CWW Executive Board Member Jonah Kruvant, who was premiering new novel, The Last Book Ever Written, at the event. If you weren’t able to pick up the novel at AWP, you still have a chance to get a copy of Kruvant’s novel at its book launches in New York and New Jersey. Kruvant will be releasing the book at Cornelia St. Cafe at 29 Cornelia St. in Greenwich Village, NY on May 2, 2015 from 3-5 pm.  And here’s a little bit more about Kruvant’s dystopian satire:

Imagine a world where people have chips in their brains, shoot needles into their veins to enter a virtual reality, and where all forms of creativity are illegal and punishable by death.  This is the futuristic setting of Kruvant’s novel, The Last Book Ever Written, which follows a detective who goes undercover to expose a community of creators. While on the case, he unravels hidden truths about the world, discovers a secret from his past, and finds himself compelled to write.  The book satirizes our competitive, success-drive society, foresees the effects of the economic recession, and warns what could happen if we let technology get out of hand.