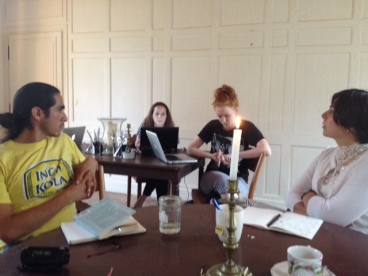 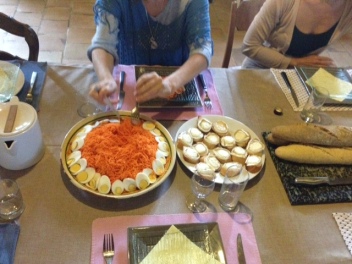 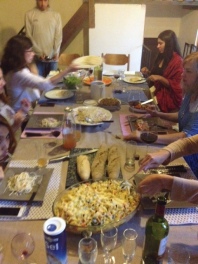 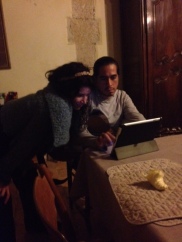 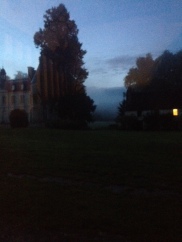 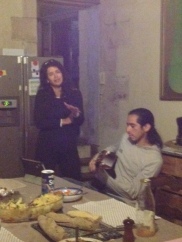 “Je veux du soleil.”  One of the songs I played for the four Juliets just a couple of days ago,  but it was true, like the song, I wanted sun or better put, sunlight.  My last day at the CWW retreat began more relaxed and with a bit of sun than others.  Taking advantage of the break of sunlight I shot more exterior shots; the Lili pond, the gardens, a family of geese, and of people writing.  Everyone was working on their script, play, or novel around in the common areas which they were getting ready to present to be critiqued the next day.  A tranquil and calm mode pleasantly hummed throughout the house, only to be interrupted by rain, loud rain, but with the sun shinning.

I have been in my share of sun-showers but nothing so persistent and, well, confusing.  Shadows were cast stubbornly outside while the rain rushed to the earth as if to prove that they both could co-exist.  Rita’s class on character development had everyone listening intently but every so often people’s concentration would be broken by the absolute volume of the downpour.  Hallway doors had to be closed shut so as to reduce the noise, though candles were nostalgically lit in the room.

After a filling dinner, I sat down with our resident actress/singer Gina as she belted out “Wide Awake” by Katy Perry while I played guitar. Jess sang “Anything but Down” by Sheryl Crow and as one of the final sing a longs we all sang “Bohemian Rhapsody” by Queen.

Leaving the next morning at 7am from the chateau to catch my flight back to NYC I realized that even though I was there to film, I learned a bit on narrative writing myself. Having sat in the workshops and listening to other people’s excerpts of their own writing I gained some new techniques that could be used in my own song-writing. Everyone had read out loud examples of the stories and poems they had written, and each person had their own way to make you sit up and listen to the beautiful stories unfolding from their minds.  I only wish I could write as well as they could.  Our retreat writers invite the listener to stay and want more.  I wish to one day see their scripts in a film, their plays being produced or their novels at the bookstore.  It was a pleasure meeting all of you writers, and I hope to see all your writing projects fulfilled soon.