Lisa A. Flowers of Luna Luna Magazine recently published three poems by visiting professor Jessica Reidy‘s series of poetry in-progress on childhood sexual trauma. Alongside the series, Jessica is also working on her novel, currently titled Zenith, about a half-Romani (Gypsy) dancer and fortune teller at a Parisian circus who becomes a Nazi hunter. And at the CWW’s upcoming Pre-Thanksgiving Yoga, Writing, and Juice Cleanse retreat in New York, Jessica will be teaching a craft class titled “The Art of Withholding,” that is, artfully crafting a piece of writing by what is not said rather than by what is told. The inspiration for this class came from her essay on Romani poetics, titled, “The Magic Word: ‘Gypsy’ Witchcraft, Love, and Breaking Tradition in Luminiţa Mihai Cioabă’s Poem ‘The Apparition of Choxani’” in the Infoxicated Corner of The The Poetry Blog, curated by Fox Frazier-Foley. Come join us for the retreat, get some writing done, stretch your mind and body, and clear your system and stress in time for the holidays.

Below is Jessica’s poem “In the Oven,” as appeared first in Luna Luna Magazine. Check out Luna Luna Magazine for “Night and Night” and “Gulls Calling Over Corcaigh.” http://lunalunamag.com/2014/11/03/poems-jessica-reidy/

behind the deli counter

behind the man in white

(valley of flesh below). I ask him,

is that meat clean? like the silver dollar I polished

when I was four—drop and rattle—
in the metal horse’s belly,

a slot up in its withers, the bank lodged in her ribs.

I’d stare in that void and wish myself in.

You see, I’ve been saving myself up

since I was young.

I’ll be clean like that, I say to the man,

the day my body is thin-gone

and can’t feel anyone.

who is carving away      legs arms heads

tissue stretched     cartilage stripped of curdles?
Who can
feel nothing through no membrane?

Once I could feel everything

when I was young:

taking everything.
I say,

I wore my candy wrapper skin so tight

he used to take it off at night.

Who could hear my squalling
over all that?

(she heard, I know she heard)

When boots hit the floor, my nerves ride

a scalpel (even now)

a scalpel cut around

the cyst cradled in my tendons

snapped when he arced

He whispered, I’ll fuck you dead.

His thumbs found my throat

and choked me back into the rainbow.

She said, Go on, tell the doctor. You hurt yourself doing cartwheels.

The membrane glowed under surgical light.

Mucinous fluid made a full moon, an oven lamp,

that lit the room as I counted backwards:

I want to say,

all that fat on the country’s side, imagine it,
bright and brilliant slick

pressed on a window, what a generous night.

What a timely celebration of regeneration.

I want to say,

my cells will renew themselves, but girl, don’t

back together and neither will you.

There will be no cave for your bones

forever rising and falling for your bodily sacrifice.

And that’s not all.
Bodies picked clean. Bodies taking
all they can.
I want to say,

the body houses those memories too dangerous

through the muscles, bones, the pelvic bowl.

Save it for later—trap the pain. Wrap me up in cellophane.
My bones shook, shook clean, shook dirty-clean

and I want to say,

hours later, I dragged myself to the couch

and slept under the skylight moon.

I woke screaming in the early morning

thinking he was the silver greasing me.

Blood stuck me to the upholstery

so floral that no one would notice

Only the morning light asks,

And only to be polite.
No, I’m not ordering anything, sir.

You don’t want to hear it, I know,

and I don’t want a thing.

I’m saving myself up

for all that country side, and all those ribs

turning over for our teeth.
I’m just one tray in the oven— 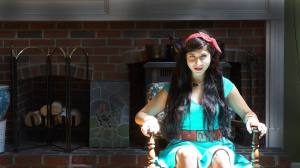 Jessica Reidy is a mixed-Romani (Gypsy) heritage writer from New Hampshire. She earned her MFA in Fiction at Florida State University and a B.A. from Hollins University. Her work has been nominated for a Pushcart, and has appeared in Narrative Magazine as Short Story of the Week, The Los Angeles Review, Arsenic Lobster, and other journals. She’s a staff-writer and Outreach Editor for Quail Bell Magazine, Managing Editor for VIDA: Women in the Literary Arts, Visiting Professor for the Cambridge Writer’s Workshop, and Art Editor for The Southeast Review. She teaches creative writing, yoga, and sometimes dance. Jessica is currently working on her first novel set in post-WWII Paris about Coco Charbonneau, a half-Romani burlesque dancer and fortune teller of Zenith Circus, who becomes a Nazi hunter.