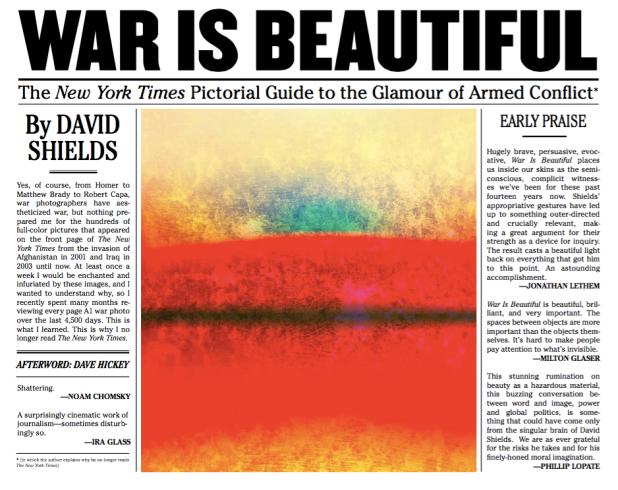 “Yes, of course, from Homer to Mathew Brady to Robert Capa, war photographers have aestheticized war, but nothing prepared me for the hundreds of full-color pictures that appeared on the front page of The New York Times from the invasion of Afghanistan in 2001 and Iraq in 2003 until now. At least once a week I would be enchanted and infuriated by these images, and I wanted to understand why, so I recently spent many months reviewing every page A1 war photo over the last 4,500 days. This is what I learned. This is why I no longer read The New York Times.”– David Shields, War is Beautiful

In an interview with PBS/KCTS 9, Shields, a former “life-long subscriber of The New York Times,” discussed his motivation for writing War is Beautiful: “As the Homeland Security slogan goes, ‘If you see something, say something.’ I felt like I was seeing something and I felt compelled as a democratic citizen to say something.”

In War is Beautiful: The New York Times Pictorial Guide to the Glamour of Armed Conflict, bestseller David Shields critiques over a decade of “extraordinarily beautiful and. . .little war-like” war images.  The book contains 64 full-color photographs featured on the cover of the Times between 2001 and 2013.  During the interview, Shields states, “The book is meant to be problematically beautiful. I mean to ask of myself and my fellow citizens and fellow readers how much beauty are we prepared to swallow in the name of glorifying war.”  Watch the interview in its entirety visit PBS/KCTS 9.

David Shields is the internationally bestselling author of twenty books, including Reality Hunger (named one of the best books of 2010 by more than thirty publications), The Thing About Life Is That One Day You’ll Be Dead (New York Times bestseller), and Black Planet (finalist for the National Book Critics Circle Award). Forthcoming from Knopf in February 2017 is Other People: Takes & Mistakes. The recipient of Guggenheim and NEA fellowships, Shields has published essays and stories in the New York Times Magazine, Harper’s, Esquire, Yale Review, Village Voice, Salon, Slate, McSweeney’s, and Believer. His work has been translated into twenty languages.  He is teaching at the Cambridge Writers’ Workshop Summer in Barcelona and South of France (July 18-26, 2016) and Summer in Granada (July 28 – August 5, 2016) Writing Retreats.