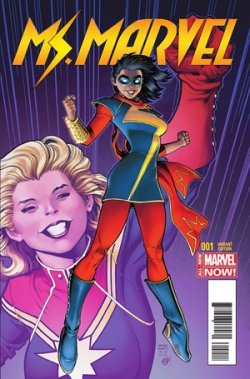 Rita Banerjee’s review of the new Ms. Marvel series, “Paging Ms. Marvel: The Perks and Perils of Creating an Islamic, Feminist Superhero,” has just been published on Jaggery: A DesiLit Arts and Literature Journal.  In the review, Rita Banerjee writes:

“The new Ms. Marvel comic series focuses on the trials and tribulations of Kamala Khan, a Muslim Pakistani-American high school student from Jersey City. The series is a reboot of the original Ms. Marvel comics made famous by the character of Carol Danvers, who debuted as Ms. Marvel in 1977 and eventually rose to become Captain Marvel in 2012. This new Ms. Marvel, written by G. Willow Wilson and inspired by the adolescence of Marvel Comics editor Sana Amanat, is full of surprises—from sly observations on cultural stereotypes to explorations of geek culture and the fan fiction–verse to redefining concepts of female beauty and empowerment. Or as Amanat writes at the end of the premiere issue of Ms. Marvel, “this book is a victory for all the misfits in the world,” as embodied in the “loveable, awkward, fiercely independent” Kamala. But in attempting to create an Islamic feminist superhero in the guise of an adorable and awkward teenager, Kamala Khan, the new Ms. Marvel has its fair share of both perks and perils.”  Check out the full review here.