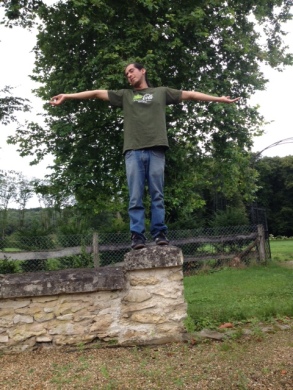 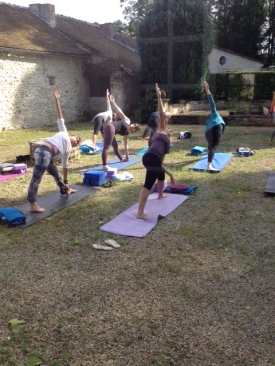 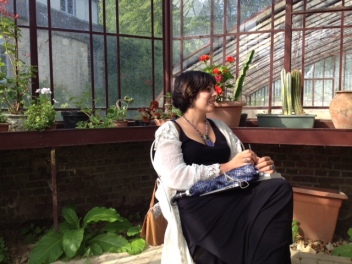 Norma in the green house 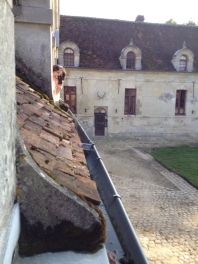 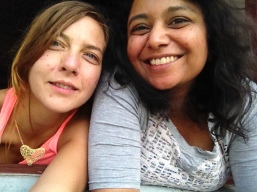 Day 4 of the Cambridge Writers’ Workshop Yoga & Writing Retreat at the Château de Verderonne started with atmospheric weather.  The morning began at 8 am with the daily feeding of the chickens.  This year, the chateau had two roosters and a bounty of hens so all was well with the gender balance.  After feeding the chicks, I was off to yoga with Elissa Lewis, who taught us some interesting balancing and partner poses today.  After a quick brunch, Norma taught a wonderful class on “Shadow, Light, and the Crepuscular.”  In the class, Norma quoted sections on bunraku (Japanese puppet theatre), ceramics, lighting, and traditional Japanese lacquerware from Jun’ichirō Tanizaki’s In Praise of Light and Shadows, and encouraged participants to produce writing which traced how objects and situations seemed to alter with changing light, and how illumination and shadows could help cast and give depth to a scene.  After our writing workshop, one of our participants, Christina, made the most wonderful chocolate covered Madeleines for our dining pleasure!  Proust would have been proud (thank you, Christina)

After some snacks, Jessica Reidy opened her workshop with a surrealist game on how playing with tarot cards could help open up insights into character development in narrative.  I got the Hierophant for a character I’m working on named Lou Cassin.  And then Jess presented the most wonderful class on how trauma narratives are expressed and described in literature.  Jess described how some of the key symptoms of trauma are indicated in narratives, and how different kinds of narrators–amnesiac, subterranean, and those of the endless present, describe and come to terms with traumatic events in their fictional works and personal essays.  Jess underlined the craft aspects of trauma literature by reading and analyzing “The terror years,” a poem, and “A Wedding in Auschwitz,” a story, by the Romani writer Rajko Djurić.

Jess’s class was followed by an outdoor session of yoga lead by the ever talented and graceful Elissa Lewis.  Rita & Norma took a moment to sneak out and rendevous with M. Marié in the beautiful 19th Century greenhouse on the Château de Verderonne grounds.  Afterwards, we caught Victor strolling with his guitar around the lawns in front of the château like some medieval wandering bard.  When he saw that there were some ladies spying on him from their rooftop balconies, he did what any good Romeo would do, and decided to serenade four Juliets at the same time.  M. Marié was very impressed by Victor’s superhuman ability to sing in French, English, and Spanish to three balcony windows at the same time.

It was a truly remarkable, and the flocks of birds seemed to enjoy Victor’s serenade as they flew over the château’s sun-dappled grounds.  The afternoon was peaceful and gorgeous until a loud pop was heard in the distance.  Was that a gunshot?  One of the Juliets asked, startled.  It seemed unlikely as Victor continued to sing.  Suddenly several meters behind him a flock of pigeons flew gracefully across the sky.  And then another loud boom.  And then the sight of a bird becoming startled and losing balance mid-flight.  It’s wings flapped hard once, then twice, and then it fell spiraling, like a smoking grenade, to the ground.  Someone had mentioned that pigeon stew was a popular dish France.  And it seemed strange that a day that began with the feeding of birds was punctuated so forcefully with the image of a bird being taken mid-flight so that it could feed us, too.