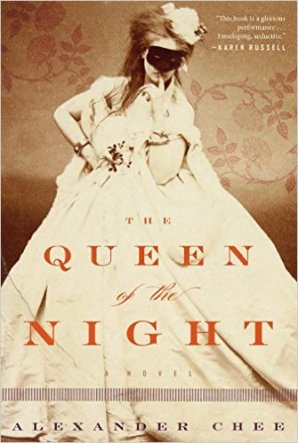 “A woman’s desire is either terrifying or it’s ignored. I think what’s terrifying, is that men want power, even over that. It is the one thing, in a sense, that a woman can withhold, her sexuality. It’s incontrovertible, the withholding of her pleasure—and that was a source of the courtesan’s power: the performance of pleasure. A courtesan not only played lover, but mother, too. You know, it was common to blame courtesans for the fall of the Second Empire—and that fascinated me. The idea that they bankrupted these poor young men, who spent so much money on them and made France so weak.”  — Alexander Chee on novel, The Queen of the Night

Alexander Chee was born in Rhode Island, and raised in South Korea, Guam and Maine. He is a recipient of the 2003 Whiting Writers’ Award, a 2004 NEA Fellowship in Fiction, and residency fellowships from the MacDowell Colony, the VCCA, Ledig House, the Hermitage and Civitella Ranieri. His first novel, Edinburgh (Picador, 2002), is a winner of the Michener Copernicus Prize, the AAWW Lit Award and the Lambda Editor’s Choice Prize, and was a Publisher’s Weekly Best Book of the Year and a Booksense 76 selection.  Chee, will be teaching at our Summer in Granada, Andalucía, Spain Writing Retreat (July 28-Aug 5, 2016).  The deadline to sign up for our Summer in Granada, Andalucia, Spain Writing Retreat is this April 15, 2016.  Apply at: https://cww.submittable.com/