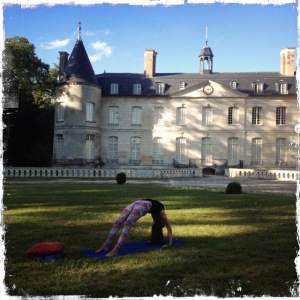 That’s when I heard about the Cambridge Writers’ Workshop (CWW), founded by writers Diana Norma Szokolyai and Rita Banerjee, and their Summer Yoga & Writing Retreat at the Château de Verderonne, France. I thought, A retreat—what a magnificent idea. Someone would say, “Jess, do yoga now. Here’s a pillow.” And “Jess, write now. I’ll take care of lunch.” I’d pay for that. A few months later, there I was.Retreats are immersions: they deepen and intensify your practice and afford the time, space, and experience to figure out how to transmute those teaching as rituals in your daily life. And Château de Verderonne feels like a sumptuous two week ritual. Yoga in the gardens or, weather not permitting, in our private salon, is led twice a day, before breakfast and dinner, by the wonderfully gifted Elissa Joi Lewis, who also teaches art classes.

And it was in the Château de Verderonne workshop that I got good advice on how to rein that puppy in. Outside of yoga class, there are allotted times for free-writing, workshops, and craft talks, all of which made me realize how much I needed a non-judgmental writing community. An MFA is a lot of great things, but most MFA workshops don’t necessarily give you room to make (many) mistakes. That’s what your community of writers is for—they are the friends you can trust (inside and outside an MFA) to look at your messy, fragile baby bird novel, as ugly and wet as it is, and not to smash it into the ground. Instead, they’ll give you advice to help it grow up into some more presentable stage of bird. And whether I was in yoga class or workshop at the retreat, I had room to experiment and could trust gentle yet wise guidance. Yoga asks the practitioner to sacrifice her ego, just as the writer must surrender her ego in order to allow herself the space to draft and try out those imperfect ideas. (Or lay those imperfect eggs? I don’t want to stretch this metaphor too much.)

With the combination of drifting around the Château with blissfully few responsibilities and the structure of the retreat, I was impressively productive even though I went on all the optional excursions to Paris, Chantilly, Picardy, and Versailles. I outlined the entire novel, wrote new scenes, and revised old ones, and came away with a real plan. I even shared some of the work I had written at Spoken Word Paris, an indie literary performance gathering, mostly comprised of expat writers.  – Jessica Reidy (Full Interview at Quail Bell Magazine)

Please Note:  Although Cambridge Writers’ Workshop Summer Yoga & Writing Retreat at the Château de Verderonne, France has passed its initial deadline, admissions are rolling until filled, and there are still a few spaces.  Apply A.S.A.P.  Rolling admissions will be accepted until June 15, 2014.