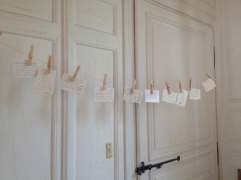 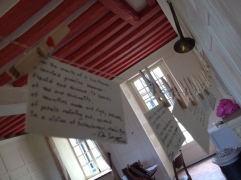 Our installation for Mst Marie 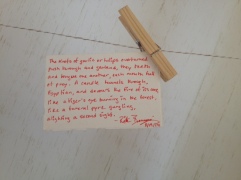 Norma and the writings we did for Msr Marie 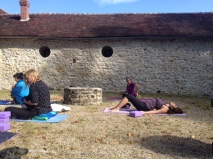 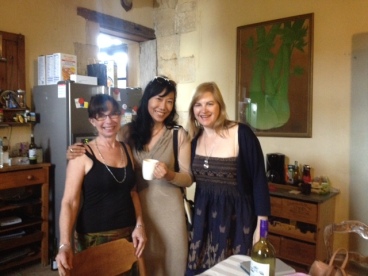 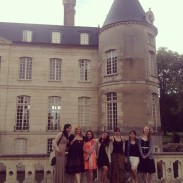 Heading to drinks at the Chateau!

The view from the bell tower!

The view from the bell tower!

Today was the penultimate day of our yoga & writing retreat at the Château de Verderonne.  After early morning yoga & breakfast, the morning kicked off with one last writing seminar.  Norma and I taught a class on “Manuscript Revision and Publication Strategies.”  We reviewed different techniques for revising poetry, fiction, nonfiction, and theatre pieces, gave an overview of the magazine submission process, and discussed how writers could put together and edit book-length manuscripts and query their book projects to agents, presses, and publishers.  After class, we had a nice afternoon break.  Some writers continued to work on their own projects in small groups, while others took one last tour of the French countryside and/or decided to make one last meal together.  With fresh tomatoes from the Verderonne greenhouse, Gina made a killer tomato sauce for spagetti which was based on a family recipe.  Norma chipped in with some delicious and garlicky hummus, and an onion-egg fry.  I made chili-seasoned baked potatoes, and Megan made some awesome butter-herb pasta.  In the afternoon, participants joined Elissa for one last yoga session together.  Elissa shared some great massage techniques and aromatherapy oils with everyone.  And then we sat down to eat our home-made snacks and then snuck out to glam up for our big night out!

After classes ended, we were invited to have apéros and hors d’oeuvres with Monsieur and Madame Marié de l’Isle at their residence, the Château de Verderonne, our lovely 17th century castle with towers dating from 1450.  The foundation for the castle was laid on the edge of the town, Liancourt in Picardy, in the early 11th century, and the castle had been rebuilt in many styles from Medieval to French Classical in the years that followed.

M. Marié began the evening by pointing out the gorgeous modern paintings of the château, many of which are currently housed at the Metropolitan Museum of Art in New York.  He also told us how his father had been at designer for the 16th-18th Century French Art Exhibit in the Met in the 1960s.  After enjoying the château’s galleries and gorgeous mote-side garden views, M. Marié showed us some rare books from the Château de Verderonne 17th century library collection.  One of the books contained beautiful maps of the original château, its original French classical gardens, and later English garden editions.  The book also contained information about surrounding châteaus and monuments in the Picardy region of France.

He then toasted all our lovely and talented writers on the retreat, and that’s when the fun began.  All the writers had prepared two short poems to present to Monsieur and Madame Marié de l’Isle .  The poems were inspired by Norma’s writing prompt from her class, “Shadow, Light, and the Crepuscular.”  Each writer had to find an evocative object on the grounds of the Château de Verderonne, study it in bright illumination and then in near darkness, and then write two pieces based on how the object was perceived in these two very different frames of light.  Some writers chose to produce OULIPO-inspired Snowball poems about their objects, while other opted for a more narrative approach.  Monsieur and Madame Marié de l’Isle seemed to enjoy all wonderful writing produced about evocative objects at the Château de Verderonne.  They also enjoyed Norma’s art-instillation of the light-and-shadow poems and will be adding the collection to the permanent library at the château.

After drinks and poetry, M. Marié continued the tour of the grand château.  He told us about Claude-Adrien Helvétius, a French Enlightenment thinker who had been one of the founding contributors to Denis Diderot and Jean le Rond d’Alembert’s Encyclopédie in the 18th century, had housed his personal library at the Château de Verderonne.  Helvétius’s daughter, Geneviève Helvétius, had lived at the Château de Verderonne with her husband, and had collected her father’s books there.  Helvétius’s wife, Anne-Catherine de Ligniville, maintained one of the most well-known literary salons in the 17th century, and in her salon, Madame Helvétius frequently hosted Voltaire, Diderot, Fontenelle as well as Benjamin Franklin, Thomas Jefferson, and Napoléon Bonaparte.  In addition to his contributions to the Encyclopédie, Helvétius was known for publishing De l’espirit (Of the Spirit), a text exploring atheism, egalitarianism, psychology, and intelligence.  Helvétius’s text was so controversial that the book was condemned by the Paris Parlement and La Sorbonne, and burned by the Catholic Church for being so subversive and atheistic.  The library is currently being renovated but would soon display Helvétius’s full collection of tomes and papers again.  In addition to these papers, many of the original manuscripts for the original plays performed during the 16-18th centuries at the Château de Verderonne’s still-standing classical French theatre will also be on display in the new renovated library.

After a tour of the library and the front rooms of the château, M. Marié took us on a tour of the château’s attic and bell tower.  On the top floor, we found beautiful slate-blue painted rooms for visiting courtesans complete with antique-clawed bathtubs and large French windows.  We also saw some spectacular views of the château’s surrounding grounds from the top floor.  Then off we went to the bell-tower, which was used to announce dinner and other import occasions to visitors and staff at the château for centuries.  The hike up the bell tower was steep and a little precarious, and once we let go of our vertigo and climbed onto the small gazebo on the roof, we could see miles and miles of the château’s lush green country estates.  Standing at the center of the center of the bell tower of the Château de Verderonne, one could almost look back, far back to a time when château gracefully straddled the imaginary town line between Liancourt and Rosey.  One could see, from up here, how the tree-lined pathways branched out from the focal point of the château in perfect perpendicular lines.  And one could imagine French luminaries and encyclopédistes walking across the château’s stage, as visiting courtesans like Marie-Antoinette roamed through the château’s hidden rooms and endless green gardens.

Dreaming of courtesans, country actors, and classical writers, we enjoyed one last dinner together with the Cambridge Writers’ Workshop group.  And then after dinner, we sat down for one last salon game, and played “Mis-tanslations,” a literary game based on Robert Lowell’s idea of purposefully mis-reading and mis-translating a foreign-language text.  Writers read out loud famous texts from medieval and classical French, Swahili, Hebrew, Romani, Bengali, Hungarian, Tagalog, and Mandarin, and our job was to decipher what these poems and essays were saying in English.  Some of the writing produced evoked the sounds and emotions of each read piece while others highlighted how mis-translations could play with both sense and non-sense simultaneously.  Overall, we had some very interesting new interpretations of Montaigne, Baudelaire, Macbeth, Roma and Hebrew folk songs, Bengali modernist poetry, “I’m a Little Teapot,” Jack Kerouac, and Hungarian Roma verse.