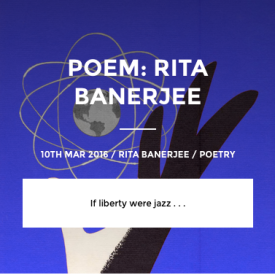 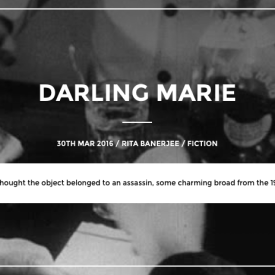 “Is it not sweet to think that, if only you have patience,
all that has ever been will come back to you?” —Isak Dinesen

“This corner of Valencia seemed gray and abandoned but in the middle of all this nothingness, Marie could imagine that door, in another time, opening up into a dimly lit cigar-centered room, covered by umbrella lamps and French boudoir wallpaper.  The windows next to the entrance would be opaque and flickering…There was gunpowder and the unknown behind it, and in her hand, she held the black-lacquered fan and its secrets…” 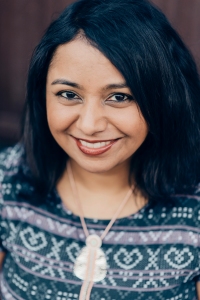 Rita Banerjee received her doctorate in Comparative Literature from Harvard and her MFA in Creative Writing from the University of Washington.  Her writing has been published or is forthcoming in theLos Angeles Review of Books, Electric Literature, VIDA: Women in Literary Arts, AWP WC&C Quarterly, Riot Grrrl Magazine, Objet d’Art, and on KBOO Radio’s APA Compass in Portland, Oregon.  Her first collection of poems, Cracklers at Night (Finishing Line Press) received First Honorable Mention for Best Poetry Book of 2011-2012 at the Los Angeles Book Festival, and her novella, A Night with Kali (Spider Road Press), is forthcoming in 2016.  Creative Director of the Cambridge Writers’ Workshop, she is currently working on a novel, a book on translation and modernisms, and a book of lyric essays.