Join us for a night of creative writing & music by and for diverse voices from NYC to Boston! Our evening will feature lyrical readings and musical performances by Matthew Wallenstein, Rita Banerjee, Erini S. Katopodis, Sounds in Bloom (Diana Norma Szokolyai & Dennis Shafer), Fawn (Anne Malin Ringwalt and Will Johnson) and Elizabeth Devlin, and will take place at the Democracy Center in Harvard Square, Cambridge, MA.

Here’s more about our performers: 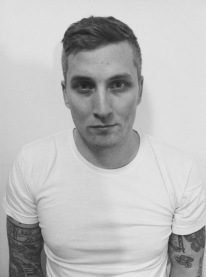 Matthew Wallenstein‘s writing has been published by the University of Chicago, the University of Maine Farmington, Bowling Green Sate University and others. He lives in a small Rust Belt town. “Tiny Alms,” his new release, covers a range of topics from growing up in poor rural New Hampshire to mental illness to the deportation of his wife. It is his first book and was Published by Permanent Sleep Press.

Rita Banerjee is the Executive Creative Director of the Cambridge Writers’ Workshop and teaches at Rutgers University.  She received her doctorate in Comparative Literature from Harvard and her MFA in Creative Writing from the University of Washington, and her writing appears in Poets & Writers, The Rumpus, Painted Bride Quarterly, Mass Poetry, Hyphen Magazine, Los Angeles Review of Books, Electric Literature, VIDA: Women in Literary Arts, AWP WC&C Quarterly, Queen Mob’s Tea House, Riot Grrrl Magazine, The Fiction Project, Objet d’Art, KBOO Radio’s APA Compass, and elsewhere. Her first collection of poems, Cracklers at Night (Finishing Line Press), received First Honorable Mention for Best Poetry Book of 2011-2012 at the Los Angeles Book Festival, and her novella, A Night with Kali, in Approaching Footsteps (Spider Road Press), released in November 2016.  Her edited volume, CREDO: An Anthology of Manifestos and Sourcebook for Creative Writing, will release in March 2018.  She is currently working on a novel, a book on South Asian literary modernisms, and a collection of lyric essays.

Erini S. Katopodis is a Greek-American poetry, fiction, and music writer from Los Angeles, CA. She’s graduating from Emerson College with a BFA in Fiction this May. Erini loves her music to be dreamy, folky, and intimate, with a touch of the strange, and loves making new sounds with new people. Performing with her are Shelby Marnett and Rob Luzier. 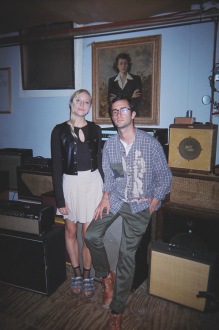 Fawn is Will Johnson and Anne Malin Ringwalt. Combining elements of banjo, guitar, ukulele, synth and poetry, the duo explores the often-ignored spaces between pre-established genres. Fawn’s debut EP, “Neither Dog Nor Car,” was released on November 5, 2016, and their first music video, for “Good Earth,” premiered on NPR’s All Songs Considered TV in January 2017. 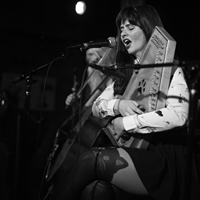 Elizabeth Devlin, with her haunting combination of lilting voice and enchanting Autoharp, is a self-produced NYC singer- songwriter. Devlin defies traditional musical structure with many of her songs, building miniature narratives and magical worlds where characters, fantasies and time collide. Devlin has toured nationally, internationally, & performs in venues throughout NYC’s 5 boroughs. “Orchid Mantis,” her newest full-length album, was released in February 2017 at Sidewalk Café’s Winter Anti-folk Festival in NYC.

A few weeks ago, the Cambridge Writers’ Workshop hosted a night of poetry and music at the beautiful Church of the Covenant for our first CWW Presents event in Boston, MA.  The Church of the Covenant offer a massive yet warm and welcoming space to all who enter. We sat in the pews amongst others gathered to appreciate art in all its forms and listened to the art of Audrey Harrer, Janaka Stucky , and Fawn.

The night was opened with Audrey Harrer, a composer, harpist, and vocalist who bridge the gap between traditional music and new technology to create haunting melodies that linger with you long after the notes have dissipated into the air. As she plays on the harp or sings during her performance, Audrey records the melodies and melds them into her work, creating harmonies and dissonances that create music that fills the space of a cathedral.

As Audrey left the stage, Janaka Stucky stood before us. Janaka is an American poet, the founding editor of Black Ocean, and the poetry journal Handsome. He opened his performance with poetry that both commanded the attention of his audience, but turned to soft intimacy that knocked the wind out of the audience with each new poem. He talked to the audience almost conversationally at one point, and we laughed for a moment, unknowing that a conversation about mechanics would turn to poetry of an army of insects made out of his own body. His performance that evoked imagery that was both unnerving yet so personal reached into a part of people that we are almost afraid of acknowledging, the mortality of our bodies but the permanence of what we leave behind.

The final performance of the night was by the light, melodious strings and vocals of the group Fawn, led by Anne Malin Ringwalt and Will Johnson, who released their debut EP Neither Dog Nor Car in the November of 2016. Their music, a balance struck between the strings of ukulele, banjo, and guitar is so carefully struck with synth it is seamless, yet symbiotic in its need for the other. One song performed was a version of Amazing Grace whose lyrics had been changed to a version the created a connection with the air in our lungs and its connection with the world we inhabit that nearly brought me to tears. It is the nature of their music’s composition and lyrics that brings light into turmoil and releases the tension that comes with the passage of time.

Voice is the oldest way to tell our stories, words and sounds passed down from generation to generation that linger long in memory. We are so grateful to these artists for sharing their voices and music with us, and the Church of the Covenant for giving us such a beautiful welcoming space to share the art of music with the city of Boston.

Our next CWW Presents evening will take place on Friday May 5, 2017 at the Democracy Center and will feature poetry, fiction, and music performances by Elizabeth Devlin, Diana Norma Szokolyai, Erini Katopodis, and Rita Banerjee!  Stay tuned for more information on our upcoming CWW Presents evening in Cambridge, MA!

Ringwalt and her partner Will Johnson, also known as Fawn, were described as “only 21-years old but [they] sound like they’ve been making music together for decades.” NPR’s Anna Marketti notes the video’s “recurring themes of religion, relationships, trauma, and tradition.”

Fawn’s debut EP, “Neither Dog  Nor Car,” is available on their Bandcamp. Be sure to see them live at CWW Presents from 7-10 pm on Friday February 3, 2017 at Boston’s Church of the Covenant.  Tickets can be purchased for CWW Presents: Faun in Boston on Eventbrite.