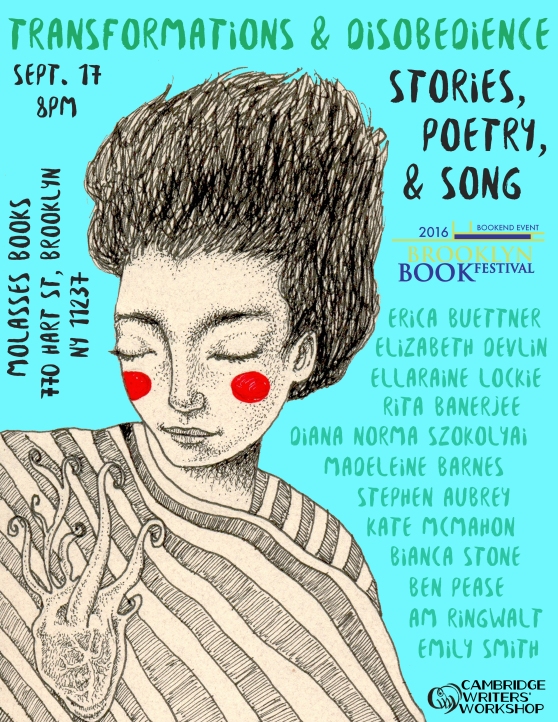 The Cambridge Writers’ Workshop is proud to announce our partnership with the Brooklyn Book Festival.  Join us our Brooklyn Book Festival 2016 Reading, “Transformations & Disobedience,” an evening of stories, poetry, and song, at Molasses Books (770 Hart Street, Brooklyn, NY 11237) on Saturday September 17!  The evening will kick off at 8 pm, and will feature readings from a wonderful array of talented writers such as Stephen Aubrey, Rita Banerjee, Madeleine Barnes,Ellaraine Lockie, Ben Pease, Anne Malin Ringwalt, Kate McMahon, Emily Smith, Bianca Stone, and Diana Norma Szokolyai, along with a beautiful interludes of music from accomplished songwriters Erica Buettner and Elizabeth Devlin!

Stephen Aubrey descends from hardy New England stock. He is a Brooklyn-based writer, editor, dramaturg, lecturer, storyteller and recovering medievalist. His writing has appeared in Publishing Genius, Commonweal, The Brooklyn Review, Pomp & Circumstance, Forté and The Outlet. He is a co-founder and the resident dramaturg and playwright of The Assembly Theater Company. His plays have been produced at The New Ohio Theater, The Living Theater, The Ontological-Hysteric Theater, The Flea Theater, The Collapsable Hole, Wesleyan University, The Tank, The Brick Theater, Symphony Space, the Abingdon Theater Complex, UNDER St Marks, The Philly Fringe and the Edinburgh Fringe Festival where his original play, We Can’t Reach You, Hartford, was nominated for a 2006 Fringe First Award. He is also the editor of two ‘pataphysic books, Suspicious Anatomy and Suspicious Zoology, both published by the Hollow Earth Society. He has an MFA from Brooklyn College where he received the Himan Brown Prize and the Ross Feld Writing Award and a BA with Honors from the College of Letters at Wesleyan University. He is an instructor of English at Brooklyn College and holds the dubious distinction of having coined the word “playlistism” in 2003.

Rita Banerjee is the Executive Director of Kundiman and the Creative Director of the Cambridge Writers’ Workshop. She received her doctorate in Comparative Literature from Harvard and her MFA in Creative Writing from the University of Washington, and her writing appears in The Rumpus, Los Angeles Review of Books, Electric Literature, VIDA: Women in Literary Arts, AWP WC&C Quarterly, Queen Mob’s Tea House, Riot Grrrl Magazine, The Fiction Project, Objet d’Art, KBOO Radio’s APA Compass, and elsewhere. Her first collection of poems, Cracklers at Night (Finishing Line Press), received First Honorable Mention for Best Poetry Book of 2011-2012 at the Los Angeles Book Festival, and her novella, A Night with Kali (Spider Road Press), is forthcoming in October 2016. Finalist for the 2015 Red Hen Press Benjamin Saltman Award and the 2016 Aquarius Press Willow Books Literature Award, she is currently working on a novel and book of lyric essays. 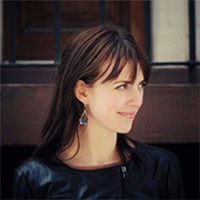 Madeleine Barnes is a writer, visual artist, proud Pittsburgher, and graduate of the MFA in Creative Writing Program at NYU. Her work has appeared or is forthcoming in places like Pleiades, Jai-Alai Magazine, Rogue Agent, BOXCAR Poetry Review, The Rattling Wall, Yew Journal, Washington Square Review, Cordella Magazine, and Pittsburgh Poetry Review. Her chapbook, The Mark My Body Draws in Light, was published in 2014. A New York State Summer Writers Institute Fellow, she was named an Emerging Writer by the Poetry Ireland Introductions Series. Aside from poetry and art, she is very interested in cheese.

Ellaraine Lockie is a widely published and awarded author of poetry, nonfiction books and essays.  Her chapbook, Where the Meadowlark Sings, won the 2014 Encircle Publication’s Chapbook Contest. Her newest collection, Love Me Tender in Midlife, has been released as an internal chapbook, in IDES from Silver Birch Press.  Other recent work has received the Women’s National Book Association’s Poetry Prize, Best Individual Collection from Purple Patch magazine in England for Stroking David’s Leg, the San Gabriel Poetry Festival Chapbook Contest win for Red for the Funeral and The Aurorean’s Chapbook Spring Pick for Wild as in Familiar. Ellaraine teaches poetry workshops and serves as Poetry Editor for the lifestyles magazine, Lilipoh. She is currently judging the Tom Howard/Margaret Reid Poetry Contests for Winning Writers. 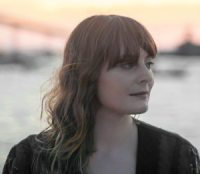 Erica Buettner is an American singer-songwriter from New England who moved to Europe at the age of 19. She landed in Paris, France where she studied French and literature and wrote the songs on her debut album True Love and Water over the course of a four-year stay in the City of Lights. In 2010, seeking sunnier shores, Erica moved to Lisbon, Portugal, where she is currently based. Over the summer of 2015, Pierre and Erica recently reunited in Paris to record their second full-length album together, to be released in 2016.

Elizabeth Devlin, with her haunting combination of lilting voice and enchanting autoharp, is a self-produced NYC singer- songwriter. Devlin defies traditional musical structure with many of her songs, building miniature narratives and magical worlds where characters, fantasies and time collide. Devlin has toured nationally, internationally, & performs in venues throughout NYC’s five boroughs.

Ben Pease is a board member of the Ruth Stone Foundation and an editor of Monk Books. His first full-length collection of poems, Chateau Wichman, is forthcoming from Big Lucks Books, and more work can be found online at fugitivesofspeech.tumblr.com/works. He lives in Brooklyn with his wife, the poet and artist Bianca Stone.

Anne Malin Ringwalt is a writer and musician (Anne Malin) currently studying in Boston, Massachusetts. Her words appear in Vinyl, Talking River, Rogue Agent, The Grief Diaries and DUM DUM Zine: Punks and Scholars. Like Cleopatra, Ringwalt’s debut poetry chapbook, was published by dancing girl press in 2014. She has performed throughout Boston, New York and Miami, most notably via the YoungArts Foundation (2016) and Rookie Magazine’s Yearbook Two launch at the New Yorker Festival (2014).

Kate McMahon is a fiction writer who also moonlights as a full-time attorney. Before law school, she was chosen to participate in the selective creative writing concentration at Boston College, where she won the Cardinal Cushing Award for best short fiction and also completed a novella. Most recently, her short story “Swapped” was published in Post Road Magazine. She lives in Brooklyn with her husband and two small sons.

Emily Smith is a Managing Editing and Communications Intern for the Cambridge Writers’ Workshop. Originally from Sarasota, Florida, she holds a BFA in Creative Writing from the New Hampshire Institute. She writes for The Ploughshares Blog and her work has appeared or is forthcoming in Bustle, Brevity, Luna Luna and more.

Bianca Stone is a poet and visual artist, and the author of Someone Else’s Wedding Vows, and Poetry Comics From the Book of Hours. She runs the Ruth Stone Foundation & Monk Books with her husband, the poet Ben Pease in Vermont and Brooklyn.

Diana Norma Szokolyai is a writer and Executive Artistic Director of Cambridge Writers’ Workshop.  She is author of the poetry collections Parallel Sparrows and Roses in the Snow.  She also records her poetry with musicians and has collaborated with several composers. Her poetry-music collaboration with Flux Without Pause led to their collaboration “Space Mothlight” hitting the Creative Commons Hot 100 list in 2015, and can be found in the curated WFMU Free Music Archive.  Szokolyai’s work has appeared in VIDA: Women in the Literary Arts, Quail Bell Magazine, Lyre Lyre, The Boston Globe, Dr. Hurley’s Snake Oil Cure, and Up the Staircase Quarterly, as well as anthologized in The Highwaymen NYC #2, Other Countries: Contemporary Poets Rewiring History, Always Wondering and Teachers as Writers.