The Cambridge Writers’ Workshop Summer in Paris Writing Retreat will take place from July 17-22, 2019.  Situated in heart of Paris’ Montparnasse neighborhood, amongst the fresh and popular open air markets and charming boutiques, the hotel stay is full of Parisian charm and our classes will take place in a beautiful Moroccan themed room that opens to a courtyard that can also be used by our writers.  Retreat activities will include craft of writing seminars and creative writing workshops, literary tours of Paris. If you’re serious about writing and want to soak in some exquisite French culture this summer, join our retreat in Paris!   The faculty includes award-winning writers Kazim Ali, Rita Banerjee, and Diana Norma Szokolyai.  Genres include poetry, fiction, and nonfiction.

The schedule for the Cambridge Writers’ Workshop Summer in Paris Retreat (July 17-22, 2019) has been announced.  More details about classes and instructors follow below! À bientôt! 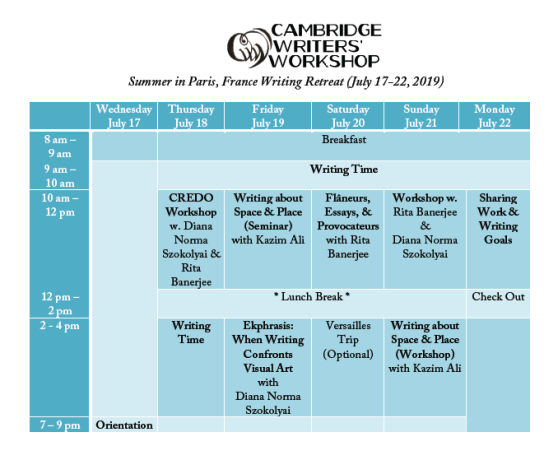 Craft Seminar:
We will look at a number of writers who have engaged space and place in their work and discuss what techniques and forms they developed, often very site-specific. Writers discussed will include Layli Long Soldier, Craig Santos Perez, Cristina Peri Rossi and Georges Perec

Generative Workshop:
Using techniques of walking meditation, we will experience the surrounding neighborhood of the conference venue (including the Cemeterie Montparnasse) as a launch point to generate work and provide feedback and critique to one another.

The word “ekphrasis” comes from the Greek, referring to a literary response to a visual scene, or more commonly, a work of art. By engaging in the imaginative act of reflecting on the action of a work of visual art, the writer expands the meaning of the art. After reading literary examples and holding a discussion about applying the practice of ekphrasis to our own writing, our classroom will be one of the most beautiful museums in Paris: The Musée D’Orsay.

An essay is an attempt.  A trial. A test. In this class, we will explore how evocative essays are attempted and constructed.  We will explore how being a flâneur and an essayist are intimately combined. And we will study how essayists from Montaigne to James Baldwin to Lauren Elkin to Edmund White to David Shields to Yoko Tawada redefine the environment they inhabit and create a space for electric art.

Kazim Ali was born in the United Kingdom to Muslim parents of Indian, Iranian and Egyptian descent. He received a B.A. and M.A. from the University of Albany-SUNY, and an M.F.A. from New York University. His books encompass several volumes of poetry, including Inquisition, Sky Ward, winner of the Ohioana Book Award in Poetry; The Far Mosque, winner of Alice James Books’ New England/New York Award; The Fortieth Day; All One’s Blue; and the cross-genre text Bright Felon. His novels include the recently published The Secret Room: A String Quartet and among his books of essays are the hybrid memoir Silver Road: Essays, Maps & Calligraphies and Fasting for Ramadan: Notes from a Spiritual Practice. Ali has taught at various colleges and universities, including Oberlin College, Davidson College, St. Mary’s College of California, and Naropa University. He is currently a professor of Literature and Writing at the University of California, San Diego.

Rita Banerjee is the Executive Creative Director of the Cambridge Writers’ Workshop and editor of CREDO: An Anthology of Manifestos and Sourcebook for Creative Writing (C&R Press, May 2018).  She is the author of the poetry collection Echo in Four Beats (Finishing Line Press, March 2018),which was named one of Book Riot’s “Must-Read Poetic Voices of Split This Rock 2018”, was nominated for the 2018 Kate Tufts Discovery Award, and was selected by Finishing Line Press as their 2018 nominee for the National Book Award in Poetry.  Banerjee is also the author of the novella “A Night with Kali” in Approaching Footsteps (Spider Road Press, 2016), and the poetry chapbook Cracklers at Night (Finishing Line Press, 2010). She received her doctorate in Comparative Literature from Harvard and her MFA in Creative Writing from the University of Washington, and she is a recipient of a Vermont Studio Center Artist’s Grant, the Tom and Laurel Nebel Fellowship, and South Asia Initiative and Tata Grants. Her writing appears in the Academy of American Poets, Poets & Writers, Nat. Brut., The Scofield, The Rumpus, Painted Bride Quarterly, Mass Poetry, Hyphen Magazine, Los Angeles Review of Books, Electric Literature, VIDA: Women in Literary Arts, AWP WC&C Quarterly, Queen Mob’s Tea House, Tahoma Literary Review, Riot Grrrl Magazine, The Fiction Project, Objet d’Art, KBOO Radio’s APA Compass, and elsewhere. She is the Director of the MFA in Writing & Publishing program at the Vermont College of Fine Arts, an Associate Scholar at Harvard, and the judge for the 2017 Minerva Rising “Dare to Speak” Poetry Chapbook Contest. She is currently working on a novel, a documentary film about race and intimacy, a book on South Asian literary modernisms, and a collection of lyric essays on race, sex, politics, and everything cool. 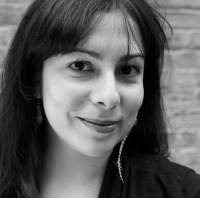 Diana Norma Szokolyai is an author, educator, interdisciplinary artist and artistic director. Her books are CREDO: An Anthology of Manifestos & Sourcebook for Creative Writing(edited anthology), Parallel Sparrows(poetry + photography), Roses in the Snow (poetry + photography), and Blue Beard, Remixed (poetry + short story + art). Her poetry was shortlisted for the 2018 Bridport Prize and received honorable mention in the 87thAnnual Writer’s Digest Competition (2018). She also performs her poetry with music and her collaboration with Project 5 a.m., “Space Mothlight,” hit #16 on the Creative Commons Hot 100 list in 2015 and can be found in the curated WFMU Free Music Archive. She is Executive Artistic Director of Cambridge Writers’ Workshop, where she leads writing retreats, and Co-Director of Chagall Performance Art Collaborative. She holds an Ed.M in Arts in Education from Harvard University and an M.A. in French from the University of Connecticut.