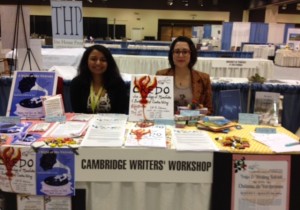 The AWP 2014 Conference in Seattle was full of meetings with wonderful writers and friends, great hijinks, and even better literary readings.  During the conference, the Cambridge Writers’ Workshop Bookfair Table was featured in the Northwest Institute of Literary Arts’ Scavenger Hunt!  At the CWW, we met some amazing new writers, and got a chance to tell people about our Call for Submissions for CREDO: An Anthology of Manifestos & Sourcebook for Creative Writing, our 2014 Summer Yoga & Writing Retreat at the Château de Verderonne, and our upcoming workshops & literary internships!  A very special thanks to Elizabeth Devlin, Jessica Reidy, Pattabi Seshadri, Jessica Day, Alice Marshall,  Rita Banerjee, and Diana Norma Szkolyai for helping man the CWW table!!  On Friday February 28, Diana Norma Szokolyai and Rita Banerjee had featured author signings at the AWP 2014 Bookfair, and later that evening, the Cambridge Writers’ Workshop celebrated “A Night at the Victrola!” at the original Victrola Coffee & Art café in Seattle!

A Night at the Victrola was featured as a top AWP 2014 reading in Vanguard Seattle and included the wonderful fiction, poetry, and nonfiction of Seattle, Portland, and East Coast writers such as Peter Mountford, Rita Banerjee, Diana Norma Szokolyai, Pattabi Seshadri, Nancy Jooyoun Kim, Kevin Skiena, Jessica Day, Anca Szilágyi, Talia Shalev, Carrie Kahler, Dena Rash Guzman, Leah Umansky, Susan Parr, & Johnny Horton.  It was great to see so many UW MFA alumni and affiliates of the CWW at the reading!  Congratulations to Peter Mountford and Anca Szilágyi for having their stories, “Life in the Group Room” and “Sugar” published in the New York Times Magazine and Gastronomica, respectively!  Thanks so much for sharing your work with us before it was published!  Check out our AWP 2014 Equisite Corpse & reading highlights at our Night at the Victrola Gallery.  Also, be sure to check out all the AWP & CWW action in Anca Szilágyi’s wonderful review, “The Best AWP Ever.” 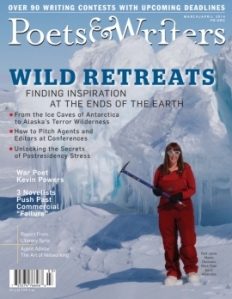 Until next time,
Cambridge Writers’ Workshop

Diana Norma Szokolyai will be a featured author at the 2014 Association of Writers & Writing Programs Conference in Seattle.  She will be signing her book, Parallel Sparrows (Finishing Line Press) on Friday February 28 from 10:00-11:30am at the Cambridge Writers’ Workshop table (BB29) in the AWP Bookfair.  Diana Norma Szokolyai’s writing has also been published in Lyre Lyre, the front page of The Boston Globe, Dr. Hurley’s Snake Oil Cure, Teachers as Writers, Polarity, Up the Staircase, Belltower & the Beach, Human Rights News, and Area Zinc Art Magazine, among others.

Rita Banerjee will be a featured author at the 2014 Association of Writers & Writing Programs Conference in Seattle.  She will be signing her book, Cracklers at Night (Finishing Line Press) on Friday February 28 from 10:00-11:30am at the Cambridge Writers’ Workshop table (BB29) in the AWP Bookfair.  Rita Banerjee’s writing has been published in Poets for Living Waters, The New Renaissance, The Fiction Project, Jaggery: A DesiLit Arts and Literature Journal, Catamaran, The Crab Creek Review, Amethyst Arsenic, The Dudley Review, Objet d’Art, Vox Populi, Dr. Hurley’s Snake-Oil Cure, and Chrysanthemum among other journals.  Her first collection of poems, Cracklers at Night, was published by Finishing Line Press received First Honorable Mention for Best Poetry Book of 2011-2012 at the Los Angeles Book Festival.

The Cambridge Writers’ Workshop is delighted to be a part of Northwest Institute of Literary Arts’ scavenger hunt on Friday Feb 28 at #AWP14 Get your scavenger hunt at NILA’s booth 907 and visit the CWW at Table BB29!

Come stop by the Cambridge Writers’ Workshop table at the 2014 AWP Bookfair.  We’re at table BB29.  Stop by to find out information about our 2014 Summer Yoga & Writing Retreat at the Chateau de Verderonne, our CREDO Anthology of Manifestos & Sourcebook for  Creative Writing, Manuscript Revision Workshop, Literary Internships, and A Night at the Victrola AWP Reading on Feb 28 in Seattle!